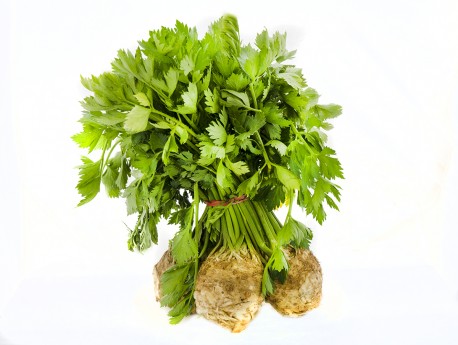 Celeriac also called turnip-rooted celery or knob celery, is a variety of celery cultivated for its edible roots, hypocotyl, and shoots; these are sometimes collectively (but erroneously) called celery root.
Celeriac is a root vegetable with a bulbous hypocotyl. In the Mediterranean Basin and in Northern Europe, celeriac grows wild and is widely cultivated.  It is also cultivated in North Africa, Siberia, Southwest Asia, and North America. In North America, the Diamant cultivar predominates. Celeriac originated in the Mediterranean Basin.

The root is bumpy and brown and must be peeled. Then the white interior is chopped and boiled or sautéed. You can mash and cream cooked celeriac and use it instead of mashed potatoes, since it only has 60 calories per cup. You can also use the green stalks for soup stocks and stews, but it is fibrous, hollow and not as nice to eat as American celery.

Drinking one or two glasses of fresh celery juice can benefit people afflicted with nervous disorders and insomnia. Celery juice is a revitalizing brain tonic, enhances memory, and is good for dizziness. Some have even discovered the sobering qualities of raw celery juice as an antidote to alcoholic indulgences.The juice from celery root or celeriac is valued as an appetizer that stimulates digestion. Celeriac juice has an almost immediate beneficial effect on the body when it is sipped. It is amazing how much juice you can extract from these large, hard, dry looking roots.

Celery and celeriac juice is traditionally used for in medication against ,constipation, fever, fluid retention, gout, headache, inflammation and insomnia. It is also used treating ailments such as migraine and nervous disorders.Fresh juice of celery also has a mild diuretic effect and prevents the craving for sweets and thereby benefits weight loss.Celery is found to be rich in magnesium and iron content. Since it contains plenty of water, it effectively nourishes our blood cells. Celery juice is a potential source of potassium. It is also employed for cosmetic purposes and is ideal for treating dehydrated skin

2.Celery root is high in phosphorus and potassium. It is beneficial to the lymphatic, nervous, and urinary systems.