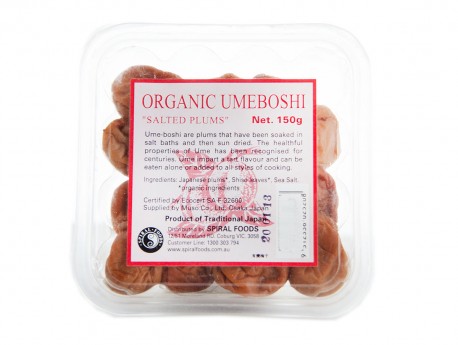 Ume Boshi Plums' are a salty pickled plum that have their origin in China over 3000 years ago. Our plums contain shiso leaves, which is added during pickling to impart a reddish colour and natural flavouring. The ume plant has been part of Japanese culture for centuries. Umeboshi was first brought to Japan around 1500 years ago as a medicine. The effectiveness of Umeboshi has been documented in Chinese medicine books as far back as 3000 years ago. Its use first became popular among priests and samurai warriors.
During the war period of the 15th and 16th centuries, samurai warriors held Umeboshi in high esteem, carrying it to revive themselves, even from the brink of death. It was not until the 17th century that individual families began to make Umeboshi in their home. There is a traditional saying in Japan, "Drink morning tea with Umeboshi." The reason behind this saying is that Umeboshi contains citric acid, which helps sterilize the intestines while the stomach is empty in the morning.
Umeboshi finally started to appear on the dining table in the 19th century. At the time, it was customary to pour green tea over Umeboshi and "kombu" seaweed for use as a revitalizing tonic. Today Umeboshi is considered a traditional Japanese pickle and is used as an ingredient for rice balls or eaten with a bowl of rice.
Gathering of ume fruits usually starts in May, but our plums are picked in June to allow the ume plum to fully ripen. Gathered ume plums are selected and pickled with salt the same day as they are harvested. The amount of salt is determined by the quality of ume, utilizing intuition and years of experience. Our farmers are true artisans.
After pickling with salt, ume fruits are dried the following month under a blazing sun for 3 full days. They are often flipped in order to dry both sides evenly.
Once dried, ume fruit (Umeboshi) are again pickled and matured using traditional methods. This last stage of pickling fine-tunes the pickled plums for the best possible taste and aroma.
- This entire process is still done by hand.  A product of Traditional Japan