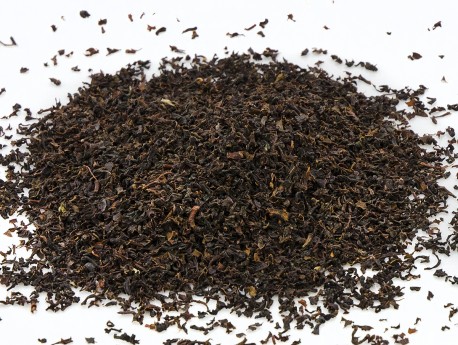 English breakfast tea is a traditional blend of teas originating from Assam, Ceylon and Kenya. It is one of the most popular blended teas and the most common form of British tea culture.
English breakfast tea is a black tea blend usually described as full-bodied, robust, and/or rich, and blended to go well with milk and sugar, in a style traditionally associated with a hearty English breakfast.
The black teas included in the blend vary, with Assam, Ceylon and Kenyan teas predominating, and Keemun sometimes included in more expensive blends.

Accounts of its origins vary. Drinking a blend of black teas for breakfast is indeed a longstanding British custom. The practice of referring to such a blend as "English breakfast tea" appears to have originated not in England but America, as far back as Colonial times. An additional account (referencing a period-era "Journal of Commerce" article) dates the blend to 1843 and a tea merchant named Richard Davies in New York City. Davies, an English immigrant, started with a base of Congou and added a bit of Pekoe and Pouchong. It sold for 50 cents a pound, and its success led to imitators, helping to popularize the name. Another account gives its origins in Scotland, where it was initially known simply as "breakfast tea", and was in part popularised by Queen Victoria.