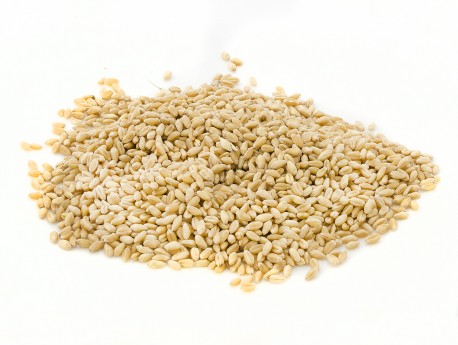 Wheat (Triticum spp.) is a cereal grain, originally from the Levant region of the Near East and Ethiopian Highlands, but now cultivated worldwide. In 2010, world production of wheat was 651 million tons, making it the third most-produced cereal after maize (844 million tons) and rice (672 million tons).[2] Wheat was the second most-produced cereal in 2009; world production in that year was 682 million tons, after maize (817 million tons), and with rice as a close third (679 million tons).
This grain is grown on more land area than any other commercial food.[citation needed] World trade in wheat is greater than for all other crops combined. Globally, wheat is the leading source of vegetable protein in human food, having a higher protein content than soybeans or the other major cereals, maize (corn) or rice.  In terms of total production tonnages used for food, it is currently second to rice as the main human food crop and ahead of maize, after allowing for maize's more extensive use in animal feeds.

Wheat was a key factor enabling the emergence of city-based societies at the start of civilization because it was one of the first crops that could be easily cultivated on a large scale, and had the additional advantage of yielding a harvest that provides long-term storage of food. Wheat contributed to the emergence of city-states in the Fertile Crescent, including the Babylonian and Assyrian empires. Wheat grain is a staple food used to make flour for leavened, flat and steamed breads, biscuits, cookies, cakes, breakfast cereal, pasta, noodles, couscous[6] and for fermentation to make beer, other alcoholic beverages, or biofuel.
Wheat is planted to a limited extent as a forage crop for livestock, and its straw can be used as a construction material for roofing thatch. The whole grain can be milled to leave just the endosperm for white flour. The by-products of this are bran and germ. The whole grain is a concentrated source of vitamins, minerals, and protein, while the refined grain is mostly starch.