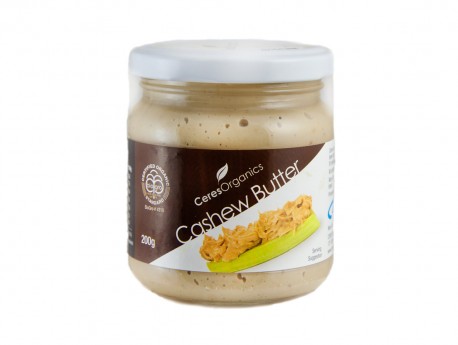 Ceres Cashew Butter uses certified organic Cashew nuts that have been lightly roasted then stoneground. Ceres Cashew butter has a distinctive, rich flavour and is delicious as a spread and also as an ingredient in baking and sauces.

Cashew Butter has a "rich" flavor, and is a popular sandwich spread, and it can be used to make soups, sauces, and dips.

Related to pistachios, cashews are said to have originated in Brazil, although they are now mainly grown in India and Africa, with India producing 90% of the world’s cashew crop. Cashew nuts are always removed from their shells, known as "apples," and treated to remove a caustic oil that is natural to the cashew. For that reason, cashew nuts are always sold shelled and dried. Even so-called "raw" cashews have actually been roasted to remove this toxic resin.