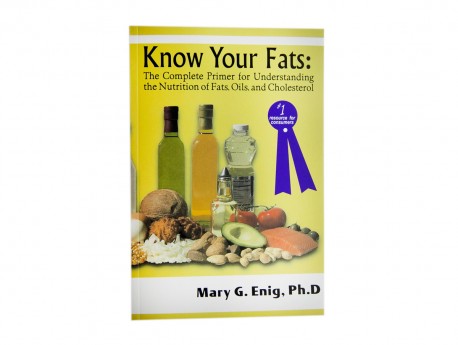 About Know Your Fats by Mary G Enig

Dr. Mary G. Enig, a nutritionist/biochemist of international renown for her research on the nutritional aspects of fats and oils, is a consultant, clinician, and the Director of the Nutritional Sciences Division of Enig Associates, Inc., Silver Spring, Maryland. Dr. Enig, a consultant on nutrition to individuals, industry, and state and federal governments, is a licensed practitioner in Maryland and the District of Columbia. She has served as a Contributing Editor of the scientific journal Clinical Nutrition and a Consulting Editor of the Journal of the American College of Nutrition. Dr. Enig has authored numerous journal publications, mainly on fats and oils research and nutrient/drug interactions, and is a well-known invited lecturer at scientific meetings and a popular interviewee on TV and radio shows about nutrition.

She was an early and articulate critic of the use of trans fatty acids and advocated their inclusion in nutritional labeling; the scientific mainstream is now challenging the food product industry's use of trans-containing partially hydrogenated vegetable oils. She received her Ph.D. in Nutritional Sciences from the University of Maryland, College Park, and is a Fellow of The American College of Nutrition, a member of The American Society for Nutritional Sciences, and President of the Maryland Nutritionists Association.

Coconut oil/butter contains lauric acid, which is antimicrobial. In other words, it kills germs and helps you fight infection.

Lard is actually only 40% saturated fat. It's half monounsaturated like olive oil, and 10% polyunsaturated.

Never cook with canola oil or corn oil or any other mostly polyunsaturated oils. They break down and become dangerous. Choose olive oil, tropical oils, or animal fats instead.

This is only a small sampling of the wealth of information included. Dr. Enig has created an awesome book.