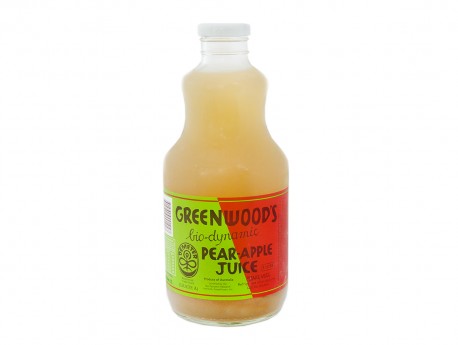 Greenwood Orchards is located at Merrigum in the Goulburn Valley, about 170 km north of Melbourne. Henry Greenwood first established the orchard in 1906. During this time orchardists were using solely organic fertilisers such as manure. Management of the orchard was then conceded to Henry’s wife Rhoda during the 1920’s. Rhoda continued to run the orchard until her son Farrendon (Farrie) took over during the World War II. During this time Farrie developed a fruit drying enterprise. Organic farming methods were used, despite the increasing introduction of artificial fertilisers.

While the majority of our Pears and Apple are sold as whole fruit. Part of the harvest is processed into juice. The juicing process is quite simple, crushing the fruit and then heating to pasteurise the juice. The juice has no additives and in heated to the lowest temperature possible, in order to retain the inherent nutitional quality of the fruit. Pear, Apple and a Pear/Apple juice are available.